Review: The Book of Lost Things 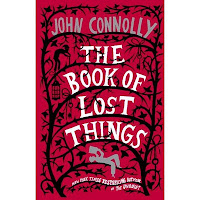 
This will be a bit of a quickie review as I'm pretty busy this week and it's nearly the end of lunch time!


Cliche is the first thing that comes to mind with this book. Well when it comes to the ending anyway, but let's start with the beginning.

I picked this up in the Oxfam bookshop just before Christmas. It appealed to me as it talked of books and stories coming alive. It's not exactly what you think. A boy, David, gets taken in to a world where fairy tales are true, not the fairy tales you know and love but twisted, distorted and more believable versions in some instances. This is definitely a book for adults despite the first impression leading me to believe that it could be for children or young adults. There is violence and sexual encounters.

The take on snow white and the seven dwarfs was my favourite retelling. It was hilarious but dark at the same time. It reminded me slightly of 'Bored of the Rings' by the Harvard Lampoon lot.

I was at first a little disappointed by the notes at the back which discuss the fairy tales included. I was disappointed as I didn't know they were there originally and thought the book was much longer. In the end, the notes were helpful as there were a few stories I didn't know and had therefore missed. I was also  rather annoyed by the homophobia that did appear in places. A book first published in 1996, no matter if it is  set within the context of the 2nd world war, shouldn't be so venomous with such comments. It does try to counter balance the comments but not fully enough in my eyes. Short rant over!

I brought up cliche at the very beginning as the book ends as I expected (but I won't tell you as I don't want to spoil the ending). Yet, part of me thinks that the book had to end in such a way to keep in the style of fairy tales which are the key, heart and point of this book.

It was a quick and easy read and it was enjoyable as I have a very vivid and over active imagination.