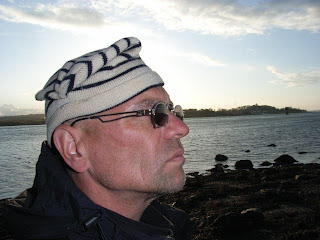 Gavin in a most excellent hat!

Gavin in another spiffing hat with his lovely pet parrot!

Gavin Weston was born in Belfast in 1962. He is a multi-media artist, writer, lecturer and inventor and lives on the Ards Peninsula with his two children, a fostered child and various animals. He studied Fine Art at Saint Martin's School of Art and Design and Goldsmiths' College, London, and subsequently worked and taught in West Africa.
In 1995 he completed an MA at the University of Ulster, where he has also worked as a visiting lecturer. He was an Associate Lecturer at Belfast Metropolitan College for many years and a regular contributor to The Sunday Times from 1994 to 2002. He is a former prize-winner of the Claremorris Open and Iontas, a recipient of The Tyrone Guthrie Award and was nominated for The Becks Futures Award in 2002.


Here, Gavin answers some questions about his book Harmattan and its context as well as few about him and his general life!

2. Is Haoua based on anyone in particular?
Haoua is based on any (or all) of the 25,000 girls around the globe whose childhoods are stolen every day. However, the book is dedicated to Ramatou Hassane, a Nigerien girl whom my family and I sponsored for six years before she was married off by her family at the age of twelve.

3. Did going to Niger as an aid worker change you?
Absolutely. There would - in my opinion - be something wrong with anyone who could witness outrageous inequalities in the so-called 'developing world' and return to the so-called 'developed world' unchanged. We have so much stuff. So much crap. We waste so much, without a second thought. It's
obscene, really. I know that sounds like a cliché, but as I get older and crotchetier I do think that national service might be a good thing. Not militia based. I mean a conscripted army of young, strong people. A little like the US's Peace Corps, but obligatory rather than voluntary. (Wow! That's possibly the most right-wing thing I've ever said!)

4. Why is the book called Harmattan?
The Harmattan is the famous, dry, dusty wind that blows from the Sahara across West Africa. In some parts it is known as 'The Doctor', but it can also be extremely destructive. The word comes from the Arabic 'haram', a forbidden or accursed thing. I used it as an analogy of the events and forces which ultimately send Haoua's life spiralling out of control.

5. What can readers do to help child brides?
Whatever access readers have to social networks, use it to make a bloody great racket! Bombard your local mayor, counsellors, MPs, MLAs - whoever. Send e-mails, letters, postcards, 'tweets', 'likes' or all of the above. A lot of people tread gingerly around the matter of age-old 'traditions'. It's time to stop being afraid of upsetting these 'traditionalists'. We're talking about the squandered potential of 10 million girls every year! If we don't take drastic action - some risks - this will continue for a long, long
time. Governments, NGOs, communities, families all have to pull together to rid the world of this scourge. It just can no longer be acceptable for us to look away. If someone was abusing your  neighbour's child you'd be outraged.
These are our neighbours!!

6. How has the book been received?
Well, it's a taboo subject, so it hasn't settled on Richard and Judy's coffee table yet. But I'm honoured, pleased (and still a little gobsmacked) that it has been endorsed by FORWARD UK (a London based African Diaspora support charity that campaigns against child marriage and FGM). We started
working in tandem about a year ago and I am now one of their ambassadors and am fully committed to doing whatever I can to help. As a writer, obviously I want the book to be thought of as an artwork, a good read, but if Harmattan can continue to help raise awareness about child marriage then I'm cool with that too. I have no idea how sales are going, but reviews have been fairly positive so far.

7. Do you see yourself in any of Harmattan's characters?
Sure. Haoua's dreams are mine. The scene where she meets her mother in the blizzard; I had that dream, but it was about my late father. I asked him where he'd been. He said he didn't know; that he didn't want to go. I asked him to stay. Then I woke up. A lot of this book wrung me dry emotionally. I
also used to dream about Haoua's family like they were real people. There's a bit of me in Abdelkrim too perhaps, and maybe in the cheeky Irish chappie, Archie Cargo.

8. When did you decide to write Harmattan?
I started working on the book about eight years ago, not long after we received a letter telling us that Ramatou had been married off and therefore was no longer part of the sponsorship programme. It just seemed unbelievable. I assumed that all children who participated in such NGO led schemes were protected and would be able to stay in school, come what may. Naively, I hadn't realised that many of these girls need to be protected from their own families - and the 'traditions' we've already talked about. I tried to find out what had happened, where she'd gone. We never heard of or from her again. My own children were really shocked. I really wanted to know what had happened. Or what could have happened. It was then that I started to consider trying to find a 'voice' for such a child. Finally a woman
writer I met proclaimed that men can't write as women and that got my heckles up. The book kind of started to write itself after that.

9. Do you have any other books in the pipeline?
Yes. I have a new novel well underway: Tin Town. It's set in and around an Irish caravan site in the 70s. It's a kind of parallel universe Northern Ireland. I'm still toying with the idea of 'The Troubles' never having happened. (I keep changing my mind.) Gary Glitter is at Number One: It's a very different era... the one in which I grew up, ('as it happens'). I'm having fun with it, although I like writing 'dark' tales. There are a lot more laughs in this book (than in Harmattan) but it's definitely not slapstick. I'm also a big fan of the short story format. I have boxes full of them! I kind of have this fantasy that now that I've 'banged out' a novel, some eager publisher will trip over him-or-herself to get these 'gems' into print. The reality, of course, is that most of them are rubbish. Art school scribblings full of angst and Kafkaesque twaddle. (There are a few that I could stand over.) But I've been writing for as long as I've been making visual art - which is for as long as I can remember basically.

11. If you could go back in time, which period would you go to?
I like boats, a lot, so I kid myself that I could have been a mariner on the high seas. (My grandfather was a RN officer and my dad was a boat builder.) You know, at Nelson's beck and call, or whatever. But I don't think I would have handled all the gore very well. I have romantic notions of the American
West too, mostly because I grew up on a farm and my brother and I had Shetland ponies and lived for cap gun fights and grainy Friday night black-and-white episodes of 'The Virginian'. (Check it out on Youtube!) I'm increasingly interested in living off-grid, and I'm pretty good at building things, so maybe I could have hacked it as a pioneer. I would miss Twitter though - despite the fact that I was initially nagged into using it by my publisher. (That's kind of a joke.) - You can follow Gavin via @WestonOfTinTown

12. What do you like to do in your free time?
I seem to have less and less of that! Anyway, there's no such thing as 'free time'. One has to spend time. I have a small fishing boat which I keep on Strangford Lough, about twenty miles south of Belfast. A lot of people don't know just how beautiful this part of the world is. Being able to access little islands and coves, watching seals and porpoises etc., that's the appeal for me. Unfortunately it's cold and wet a great deal and I want to go and live in Greece. I have an old rickety boat there too. (It will be taking water as we speak!) I love hanging out there and think it is a beautiful place despite the recent tribulations. I've had a vague master plan to dispense with mortgages and bricks and mortar for some time now, but it hasn't quite come together yet...

13. What do you want for Christmas?
Nothing! Absolutely nothing. Just the company of a few people I love. Enough food. A little wine. That's it. (And maybe for my boat not to sink!) These days the more I have, the more enslaved I feel.

14. Do you have a pet?
I do! I have two dogs and a crazy parrot who calls my name when I'm trying to work! I kid you not. The dogs are regularly perplexed by this 'talking hen'. He's the 'guvnor' around here!

15. What was your first job?
I used to have to get up and feed 10,000 battery hens before school. Five days a week at one pound per day. We had around 50,000 birds in total. A horrible business. Auschwitz for chickens. For years I've had a few free range bantams picking around my garden by way of an apology!


A few of Gavin's Niger pictures 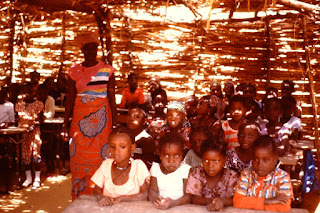