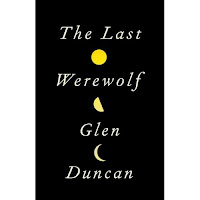 Jake is a werewolf and he's been one for a very long time and he's gone through a lot of shit. Now he seems to be the last one and things are all going a bit tits.

This book was lent to me by one of Boy Geek's flat mates. He thought I would enjoy it, he was wrong. I usually love books about the supernatural, the fantasy the weird and wonderful but this book was bloody awful! Let me explain....

At the beginning it's rather unclear who is who and it took me a while to gather that Jake was the were and Harley was the familiar. ARRRRGH!!!! It just wasn't written well. Following on, the story was hugely predictable and therefore it was rather boring. I could tell who would do what and why as we went along the whole entire way. Also, the story tries to do too much. GD seems to try to weave too many elements and characters in to what could have been a very moving and interesting tale. I think it was the mere volume of very predictable character and story lines that lead the story to be so rather shit. The keep it simple principle would have benefitted this book more.