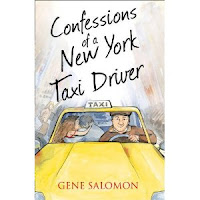 As I'm sure you all know by now, I'm not one to beat about the bush and I'll give you my truthful opinion from word go, regardless of who sent me the book, who wrote the book, you know, all that shizz. So, let's commence...

When I started reading this book I hated it! I found the driver to be patronising and irritating and to be honest I wanted him to piss off, shut up and stop thinking he was such a big bloody deal! Boooo him! I even complained to Boy Geek about how annoying the book was and how much I didn't like the driver.

However, as I sat in a bar at Heathrow Terminal 3 for 5 hours on Sunday I actually changed my mind. I had to give this book time, I had to embrace it for all it was worth and take it with the tone in which it was given. I had to get in to it, to put it simply. By the end of it, I realised that the driver is just, your normal cab driver who has seen some crazy things in this world, as well as some horrible ones and that he actually has a lot of funny, intelligent and insightful things to say about people and about life.

The book is split in to themed sections and cover everything you would expect to find in a book from a NY cab driver. Here are a few comments on the sections I liked in particular:

- Sex
Everyone's favourite topic and I would have possibly cried if this hadn't featured. The audacity of come people is amazing and hats off to the driver for putting up with what must have been some of THE most awkward situations ever known to man. However, I am jealous of their bravery. Oh and the last story of this section was gorgeous and written with a lot of feeling!

- Crime
Dude, it's The Big Apple, there is the mob, there has to be crime! The stories were cliched and expected and what you needed in this book!

- Celebs
Weirdly, my favourite story in the entire collection appeared in this one....I would like you to guess which one and 10 geek points if you do.

- Crazies
I bloody love them, they are great and I was delighted to have a section focusing on them. The sheer lack of comprehension was superb.

- Hustlers
This was an interesting section as it told you all about NY. It was also a bit more serious which was cool as the book took on a totally different tone.

- Road Rage
This section made me angry, really angry, the world is full of bellends.

- At Journey's End
The woe and melancholy I felt at the end was incredible. Well done driver on being able to write so beautifully and with such passion.