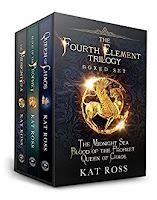 Publisher: Acorn
Before I review, I'm sorry I'm not really keeping up with the reviewing lately, work is just so busy all the time...and my reviews keep falling to the bottom of my list...sorrrrry
Anyway, the fourth element trilogy
Well, I was prepared for it to be a trilogy so I went in pleased. I was going NUTS with things not being stand alone but only finding out when I got to the end of the book. BOOOO
I'm going to review all three in one and here goes.
The characters are varied, and vast, so you will need to refresh yourself I would imagine if you leave time between each book. There are baddies, BIG baddies, goodies, TOO good goodies and those guys inbetween. The relationships between these characters are also amazing and developed completely and complex, from love, friendship, confusion and hatred. The characters really blossom in themselves and their relationships as the three books develop.
Plot wise, it's pretty darn good. There is the main plot of sorting out just what's gone on in the past an dhow we clear up the lies and the what could be interpreted as slavery. But then there are the subplots of love and friendship, mini/minor quests and all that jazz. They interweave perfectly.
Style wise, I thoroughly enjoyed the variety of POVs/voices included in the books as we went along and the story and characters broadened. The continuously changing voices gave the book variety and excitement and things like that. YAY.
The only downside I see is at the end we are told there are more adventures for the characters.....why can't things really be just left alone?
HAppy Reading for these three though
BG﻿

Sooo, I am not a huge reader of biographies or autobiographies, but I've found myself reading two of late, two that I enjoyed thoroughly but are SO very different. And here they are

Trevor Noah is a recent addition to my life, Boy Geek discovered him a few years ago, and since then has been a fan. I bought Boy Geek TN's book for his birthday and he devoured it on holiday, so I followed suit.

It's an incredible book, it is funny, devastating, unbelievable, heart-breaking and inspirational all at the same time. It really is amazing that TN has become one of the 100 most influential people in America after all the shit he's put up with and the odds that were so very against him for such a long time. Also, I have to point out that TN's voice and personality are wonderful, I obviously don't know the man but it sounds like him and I don't think it has been too heavily edited or influenced.

But, despite this book being about TN and his life, it is also about his Mum. She seems like an amazing woman, an inspiration in her very own right. And considering all SHE has been though emotionally and physically it's amazing that she's still the strong woman she seems to be. And in one piece too.

This really is a wonderful book. It still makes me think, it had me in tears of joy, despair and laughter and even caused me to be very silent and speechless for a while....which NEVER happens.

THANK YOU MR N for this book.

The second book comes from northern delight Sarah Millican. She's not as new to me as TN but still pretty new. The bezzie has ALWAYS been a huge fan of SM and about 6 years ago I took the bezzie to see her for her birthday, live. And since that moment I've been a fan, the woman is hilarious.

The book indeed, tells us of SM's life, her experiences, her personal struggles and how she's overcome them with the support of her friends, family, cake, pets and comedy.

I found it easy to relate to many parts of this book, which made it strike a few chords with me and also made me feel like giving SM a massive hug for telling her story that's one so many people can relate to. Not so much the comedy, I'm not as funny as SM by any means, but the anxiety, the love of cake and the struggle with what people think about you and how they see you.

The other thing I'd like to say about this book is I love the words of wisdom at the end of each chapter. The advice that's given on how to be champion. It really is some very sound advice on many an occasion.

Well, have a read, something for everyone here for sure