Publisher: Headline
I will be totally honest but I judged this book by its cover and didn't read it for ages. But I have A Brief History of Seven Killings as one of my books on the go at the moment so needed some crime fiction to soften the brain stretching that Brief History requires.
I want to know first off why the case mentioned in the first chapter wasn't a book it sounds AMAZING and pleas write a prequel I would be allll over that like a rash. The reason I would be all over that? It sounds like a far better plot.
I have to say that this book bored me a bit, I found some parts interesting, but they all related to Dan and her past and what she'd been through. I really didn't get down with all the HMS Tenacity stuff, it was all a bit too far fetched and unrealistic and was very thin in its credibility and what have you.
Dan as a character is great and her relationships with the others was awesome too, so please do give us the back story in a new book!!!
The violence across the novel was very graphic and quite scary in places, especially when against women. But I couldn't like Dan. Yes, I found her character intriguing and interesting but I couldn't help but feel that she is an idiot of putting herself in the situations that occur and she needs to get a grip.
I just don't know what to make of this book, but there certainly is potential for there to be a cracker written around it!
Cheers
BG
﻿

Publisher: Thomas Hamilton and Co
So, my oldest and dearest friend presented me with this book when she came to visit over my birthday. She also had a great story linked to it, but I won't tell it here.....I do not wish to get in to trouble ;-p
So, we meet Lucy who has just woken up from a coma but, she doesn't appear to be Lucy anymore, or at least not just Lucy anymore.
I defos think this book is more of a YA novel than one just for adults. It has a more 'tame' tone to it that would make it perfect for the younger audience, but it's also an easy read for adults so why not...as always there is a cross over these days and I say it needs to carry on.
Anyway....I thought the bulk of the book was alright. I was intrigued, I was drawn in enough to keep turning pages, but the ending of the book really did seem rushed. There were pages and pages of build up and description and background, but when the final hurrah arrived, it really was very very rushed and that was a bit of a disappointment.
Also, I think this book not only needed better proof reading but it needed better editing as it did lack a certain something and read VERY oddly in places.
Thanks
BG
﻿

Publisher: Titan
So, this is the third Lou Norton book and I will just confirm I still love Lou. Land of Shadows was book one and was stonking. Skies of Ash made me fall in love with Lou and RHH more.
But, enough about them, on with this one.
I'm going to start with the story of the actual crime. There has been a murder (shock horror) and Lou is on the case with her crack team of amazing characters. The crime(s) are really rather horrible and unsettling and the emotions they bring out and other sub plots they encourage are good. BUT, I knew who the murderer was from the word go. I don't know if I'm just a super awesome detective, or if I've read so many crime novels I know every trick in the book and know what to look for. I do hope it's one of these two and not something else. The only real flaw in this book was that I could spot the do badder from the start, so the crimes didn't really grip me.
What did grip me was getting to know Lou, Colin, their lives, friends and loves even more. This novel, for me at least, was more about the context and the lives of those behind the crime fighting badasses. I enjoy how RHH doesn't make Lou infallible, I enjoy how Lou is normal, how Lou is pressurised, vitimised, troubled by life and not just by her work, as so many other female detectives are in books. She's a real person and I want to be her friend.
Overall, I don't think I liked this book as much as the other two when it came to the actual crime part, but I liked the character analysis and relationship building part and am much looking forward to what the next one will be like.
Happy Reading

Publisher: Jo Fletcher
I'm going to be open and honest from the start, I have very mixed feelings about this book.
But I will start with this....
The book arrived on my doorstep a very long time ago (sorry about that) in a glorious parcel with my own Drakon, keyring, note and pic! YAY. It was lovely.
Now, the book to start with was an easy to read, funny and rather cool fairy tale styleeee novel. But, the more I read the more I was getting to feel that it was a bit like the Discovery of Witches series of books which really did piss me off in the end as the female characters are odd for the world, slightly poor on friends and need looking after by MEN. These men will make the woman seem useless and airy fairy, weak and stupid....this got to annoy me a bit.
BUT, there were some improvements on the above as Lucky did grow a pear and do a few independent things, but did need men to save her in the end.
I did like the characters other than Lucky and her feeble side. The humour amongst them, the cheekiness and the stark, fairy tale contrasts between good and bad were really enjoyable.
Overall this book had the feel of a kids book with some bad ass twists that defos are not for kids. I'm kind intrigued to read more of this Soulseer series, but then again, if Lucky stays as she is I may get cross.
But, you decide. 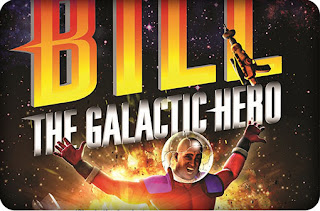 Publisher: Gollancz
I'm really not sure if I am either really stupid and completely missed the point of this book, or there wasn't a point and I'm trying to search for something. This book has bamboozled and confounded me in many ways!
So, what my review is really going to boil down to is, 'is this book an intelligent comedy/parody style novel like something the Pythons or Douglas Adams would wright. OR is it just a pile of fluff about nothing?' I HAVE NO IDEA.
I can see that there could be some meat to this book - there could be comments on the futility of life and how we all really have no choice and are controlled by things such as government, media and money. But then again, this could just be a space novel for pure entertainment.
What I can say is that I'm not sure why it was 3 books when it just continued on with the story, I didn't really like the style of writing sometimes as sentence structure read awkwardly...but I did like the humorous moments and I did like the end.
Hmm
Book Geek
:-s﻿