Publisher: Windmill
This review is going to be a bit of a mixed bag...just to warn you.
I found the farm and childhood chapters a bit slow going to start with. The other parts were more eclectic and off the wall which I thought were stonking and really kicked off the book in a really interesting way. The history of everything via different mediums, voices and people was very good.
When part 2 began my feelings shifted, dramatically. I was sympathetic towards O to start with, I had understanding for how he was pained, but I'm afraid suspicion took over as I believe his selfishness began to reign.
The kids were lovely characters and balanced out the feelings of anger and annoyance I had about O.
I was not 100pc convinced by the use of Welsh dialect in the book. I was a bit miffed by the constant use of 'like' when the due wasn't really full Welsh and lived in Birmingham. 'Like' being inserted every other word in the  conversations of the Welsh characters seemed rather patronising, and a little bit along the lines of...'that's what Welsh people say' without any real research.
Finally, the ending...WHAT THE HELL??? I am not sure if I completely missed the point or if it's just really bloody weird....comments welcome!
Anyway, yep, a mixed bag, there were things I really liked about this book but things I didn't too...I just don't know where I stand.
BG
﻿


I'm giving you another book that's been on my bookshelf for a yonk and one that I didn't think I'd like....apparently it's a theme at the moment.

Fan is the story of Finchy and his coming to terms with events that turned his life around, made it different 15 years prior. While, when you read the blurb and the start of the book you believe it's going to basically be about football and Hillsborough, it isn't. Yes, they of course play a big part, but it's about how one bloke is trying to sort his shit out and confront all the crap and doubts and troubles of his past.

I will admit that I now know more about Nottingham Forest and football to an extent than I ever thought I would (I'm a rugby kinda gal), but it was interesting, it isn't tediously written about and reported. It's integral to the novel, the events, the scores, the players and the matches themselves in telling the narrative of this one man.

This book is also very misleading, but I will not say more than that as I don't want to spoil it for anyone at all.

Book Cunt is a fan of this book, and now I am. If you don't think it's for you, just give it a go, try it. I'm really glad I did and will be recommending it to people for a while.....I am thinking I have a bit of a book hangover from it too!

Publisher: Jo Fletcher Books
So, I've had this book and two other TF books for bloody ages and TBH I've not really fancied them as horror novels don't always wash with me. But I fancied a change, and I've not read any JF published books for a while.
I'll start off with this...this book, despite being a horror novel isn't as bloody and violent and horrific as one would expect. I was not grossed out, or upset, and when there was some of the grim stuff in play, it wasn't as in your face as it could be. It is creepy though, very creepy on several levels, mentally and heebie jeebie-y.
I really liked the two points of view, Jack and Francis. These are two very different characters and provide good variety to the novel. Also, I liked the friends dynamic as a whole. I enjoyed the concentration on one group of people and I thought the observations of interaction and thoughts was rather good.
This book is, well to me anyway, more about relationships with friends, family and one's self than the whole horror, scary, frightening monster thing. The scary stuff is a good basis to explore such themes and a very unique one and it works, but for me it wasn't the focus.
Also, I enjoyed the background of folklore and fairy tale, which took some of the scary edge off too.
Defos not what I expected, and in a very good way. Far more depth to this book than expected and I now look forward to reading the other two TF books in my possession.
Happy Reading

Review: In her wake

Publisher: Orenda
I thoroughly loved The Judas Scar by AJ, as did Boy Geek when he read it a few months ago (yes he's behind the times I know) so was thrilled to bits to get this book from Orenda! YAY.
So, Bella is the main character, her mother dies and basically all hell breaks loose and life goes a bit tits (to say the least).
I'm going to start with Bella, for a lead character, I really didn't like her. I found her irritating, needy, desperate and a bit of a bitch. But at the same time I could see why she was like she was, I think after trauma such as she experiences I would be selfish and needy and a bit more mental than I am too.
Now Henry, all I will say is stick with him, just do it!
I really enjoyed the style, I enjoyed the present and the past, I enjoyed the fact that slowly but surely you were allowed to become party to the whole story. I will say that the beginning was a tad predictable, but that changed wonderfully and you were tossed and turned around constantly.
I really don't want to say too much more about this book as I don't want to spoil anything for anyone. This book is haunting and lingering it tips you to the edge of horror, madness, disgust and back. It's worth every page turn so do it!
Happy Reading
BG
﻿

Review: For the last time

Sorry I don't have a pic for this book, I can't find one, but it's from Bobaloo Books!

This is very different from JK's last book, Dear Beneficiary, which was a hoot! This book is far more intense, far more serious and far more brutal, it has a few light hearted moments, but only a few.

This book is all about Alan and his life of crime, remorse, trouble and horror. It takes you through many a twist and turn and you really get to like Alan, you really start to feel sorry for him and in the end even care for him. It made me feel thankful for what I've got and the opportunities I have been afforded.

JK has done well to write it from the view point of a dude, and the male voice coming from this lady worked for me, I was convinced. You can also tell that there has been some research into what life is like for prisoners and what a life of crime can entail.

There were only two bits I have to comment on that I didn't like. A predictable edge did kick in and continue through the novel after the first 3rd. Also, the last chapter annoyed me a bit, it was rather moralistic and didn't really add anything to the book.

Overall, I enjoyed this read, it's a good look at the life and times of a murderer, a murderer who you really like! 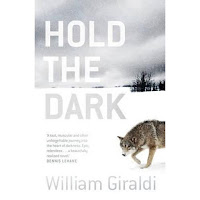 Publisher: No Exit Press
I will warn you, this book is dark. It starts off in a dark place, mentally, physically and emotionally, but this just gets worse and worse and more and more intense. It's oppressive and claustrophobic, but god is it good!
This is a book that will suck you in, as you believe one thing, it will suck you in as you love or hare a particular character, but then, it will toy with you, chew you up, spit you out and challenge all you have thought about the plot, the people, their actions, their past and their future! OH MY GOD THIS IS A STONKING BOOK.
﻿
I have had it on my shelf for a while, as the blurb makes it seem a bit tedious, a kid is taken by a wolf and a wolf expert comes along to help conclude what exactly happened. Don't let this fool you! This is a deep, dark, and brutal novel which is fantastically written. There is blood, gore, and eloquence, there is love, passion, deceit and trickery, there is everything you could need in a truly epic read.

In this book one man, a farmer and butcher is trying to cope with a dramatically changing world, forcing him to alter his belief system, his life and perceptions of what's right and wrong.

I had to start with a brief summary this time, as unless you remember the above whilst reading this review, I don't think you will grasp how interesting this book is and how challenging it is in many ways for a sci-fi(ish) read. It looks at how any belief system, anything that you trust as concrete and unmoving can go completely tits. The book is basically, well to me any way, a social comment but with fun, feeling and realism thrown in! But at the same time, damn this whole concept is bloody terrifying when you think about it!!!

I loved the vocab and POV of the whole novel. Graham's literariness was most enjoyable and unexpected. I was also particularly pleased about how the Da Vinci Code was used, as let's face it, that's all it's bloody well good for. (I hate that book).

The only bit which I wasn't totally enamoured with in the book was the sort of 'all for love' bit that cropped up. It was totally cheesy, but now that I think about it more, on the spot, I actually kind of like it...hmmmmm. I don't want to say more as I don't want to spoil the book for anyone, but, I had to say I've changed my mind.

In all, this book was not what I expected, it was a really good read. The style was great, the humour was fab and on the whole this book is worth the time and money!