Review: This Will Be Difficult To Explain 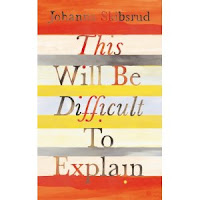 Hardback: £ 16.99
Publisher: William Heinemann
As this is a collection of short stories (again!!!) I'll do my usual and go through each one in turn! There were many stories and they were all pretty short.
The Electric Man
A sad, upsetting and some what tragic tale. However, it did kind of highlight that with money you can be and do what ever you wish! Money brings you happiness is a vague message in this story. I did feel that there was a bit of the spy about the electric man and he was used to being many different people at the same time.
The Limit
There isn't a lot a can say about this story and I'm not 100% sure why. However, what I can say is that I'm most pleased that it all turned out for the best!
French Lessons
Language barriers were highlighted to me in this story. The importance of communication on any level, be in vocal, visual or even emotional was an important theme. Sometimes actions can speak a lot louder than works and this was very clear. There was a message of things aren't always bad too! I liked that muchly.
This Will Be Difficult To Explain
I don't know if it was the sleep deprivation, wine or the travelling, but to be honest this story confused me some what! There were possibly 3 narratives, I can't be sure! This story was difficult to read let alone explain!
Clarence
A macabre piece that reminded me of a conversation I'd had earlier in the week with my colleague Chris whilst we were driving through California. We discussed how it'll be great to get really old so you can do what ever the hell you want, just like Clarence! The story was a confessional on deaf ears, did it provide an emotive release?? Also there was the typical controlling wife....
Signac's Boats
I was really really annoyed by the return of Martha and her little crew from earlier stories! Seriously, why does she have to be a character once again??? It ruined the illusion of a short story and made it seem like a book with chapters rather than separate stories. I did enjoy the very brief art v. science debate though.
Cleats
MARTHA PISS OFF!!! God!!! She wasn't the main character of this story but she cropped up once again! ARRRGH!!! Kind of the final straw in ruining the collection for me as a whole.
Angus's Bull
Woo, no Martha! A stepford wife kind of story. It was very old fashioned and I imagine it being set in the 1930s with the little woman waiting at home whilst the man of the house sorts out the finances etc etc. There was a bit of dark humor in it also!
Fat Man And Little Boy
This time, Ginny returned, why I ask why??? Ruining the short storyness of the whole collection! Boo!! This story also annoyed me as it had a very self aware feel to it. Like The Alchemist in some ways, it seems to be trying to get you to think about things in a very obvious and pretentious way. Bums!


I'm not really sure what I have made of this collection over all! Some of the stories I enjoyed, some I didn't as I'm sure you can clearly see! Anyway, I'll let you make up your own mind.