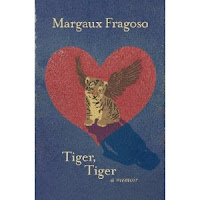 Tiger, Tiger: A Memoir - Margaux Fragoso
Paperback: £ 9.99
Publisher: Penguin
A friend gave me this book to read at my new year's eve party. She said 'read it, it's about a little girl and a pedophile.'

Margaux Fragoso recants her life under the extreme influence of the pedophile Peter from the age of 7. She discusses her home life, school life and life with Peter, her primary abuser.

I've read a few debates and reviews which have cemented several internal debates. Did Fragoso really need to write this book? Did she write it for her own cathartic purpose? Is this book meant to empower other victims of abuse? Are the events, incidents, scenes, exaggerated as they are drawn from childhood memories? Are the aforementioned exaggerated by the requests of the editing team? I don't have answers to all these but I have my own opinions.

This book, in some ways needed to be written, both for herself and her audience. Yes, I'm sure it empowers readers who were also victims of sexual abuse, but it also opens up a world that is completely alien to, I'd imagine, the majority of people. It makes you aware of signs to look out for, behavioral patterns to be worried about and characteristics to be wary of.

I fully admit the events could be exaggerated. They may not be exaggerated by an editor's request, it could be because when one remembers events from childhood they sometimes seem more grotesque, exciting, worrying, joyous etc. than they actually were. However, the opposite can happen, these events could actually be the repressed descriptions and they were actually more traumatising than is conveyed on the page.

Stockholm Syndrome is a phrase that has been thrown around in reviews and comments on Tiger Tiger and in the book itself. I can see why this has been brought up. Fragoso still appears to have a deep affection for Peter to some extent, it is understandable in some ways as he was in essence, for a long time, her only friend. However, it does feel as if her emotions are only that intense towards him because of his clear manipulation. He manipulated her to such an extent that she forget who she was, how to socially interact and how to love others and herself.

For me this is of course a highly unsettling, upsetting and worrying book. I don't know if I was reading it due to morbid fascination or the compulsion to read an actual interesting narrative. Is it wrong if it was both???

The final afterword did slightly let the book down with its cliched conclusion and final few lines. That is my, I'd say, main criticism of the writing style and contents.

In the end, this book isn't just about the physical, sexual and mental abuse of a young girl by a much much older man. This book is about the abusive relationship between father and daughter, husband and wife. It's about mental illness. It's about love. It's a book about friendships. It's a book about childhood and the coming of age. It is a book that I won't forget.

I would say my usual happy reading but it seems inappropriate in this instance!