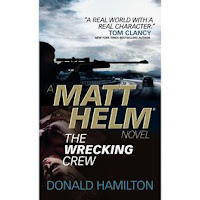 This book has torn me!! Torn me and my opinion completely!!! Wahhh!!!

Let me start from the beginning...

This is a rerelease of a novel written in the late 1950s and printed in the early 1960s. It's a post war spy thriller. I was expecting a cross between old school Bond and a bit of a more old school feel Jason Bourne. Also, as it was set in a post WW2 world I was expecting it to feel dated. The action and the events and even in most cases the technology, didn't feel dated in the slightest. The novel can be easily pictured and read without thinking it's a bit too old and outdated for enjoyment. This was an excellent point.

The part that did seem dated was the attitude towards and development of female characters. This was the only point that tore me, but I think, as this is a novel of the 50s it is to be expected. Helm is a total misogynist. His attitudes and treatment of women drove me mental and it made me rather angry as I believe there is the possibility that some of the author's own opinions are in there too! Booooo to them both.

If you get past the above women issues though, the story is excellent. There is all you want from an action packed spy thriller and more. It's fast paced, intriguing and keeps you turning pages. There are elements of Bond in there and elements of Bourne and the novel also contains its own unique something.

Defo a book to get your teeth stuck in to if you are a fan of the spy genre, and if you fancy an enjoyable and easy read. This isn't the first in the series....I do have that one but wasn't aware there was an order....but do not worry, they read as independent stories apparently and reading them out of order will not affect enjoyment at all.