Mr G is the author of Wilderness of Sinners which I read a month or two back.
This is the book:

And this is the man and a bit about him: 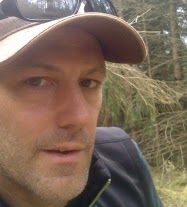 Tom Gold is a writer, blogger and lover of all things outdoors. He grew up in rural Northamptonshire where much of his early childhood was spent camping in the woods, watching Westerns and imagining himself as a hero. Not much has changed although he now lives in rural Stirlingshire with his wife and two small boys. Sometimes he gets to indulge his hobbies of kayaking, climbing and skiing among the wild, rugged, lochs and hills of Scotland. That said, he is equally at home, chin-on-chest in front of the TV or surfing the web for outdoor kit he can’t afford.

And here are 15 questions with Mr G as part of my Indie Series:

1. What inspired you to write Wilderness of Sinners?
The events that took place there have been bouncing around in my head for fifteen years and all along I’ve known that they had the makings of a story. The difficulty with writing it it down has always been the fact that I saw things and did things there that I am not proud of. However, the act of committing the first few sentences to my laptop really helped me be honest about it all for the first time.

2. Have you seen anyone from your US experience since?
No. I left in a hurry and have not been back!

3. Do you think you would be who you are today without the experiences in the US?
Hard to say. I do know that when I first came back I had a lot of difficulty keeping the lid on my temper and empathising with people’s everyday problems. I upset a lot of folk too, especially my immediate family but bizarrely things actually came to a head just before the wedding of an old friend. His fiance was in floods of tears because the table decorations for the reception were not right and I just could not understand how this spoilt little girl could get so upset about something so trivial, and I told her as much, very bluntly. The reaction of everyone present, including her family, finally persuaded me that I was the one who needed to change, not the rest of the world. I’m a much nicer person these days!

4. Would you do it all again if you could?
Yes, although I might make one or two changes!

5. Do you regret how it all ended?
It was time to go so I don’t regret it all coming to an end but I’ll regret exactly how it happened for a good few years to come.

6. Which of the boys you worked with made the biggest impression?
Anthony Mason (not his real name) was a genuine hard case and a very complex character, gaining his trust was a big achievement for me. By the time he left I think he and I both thought he had turned a corner in his life and I foolishly believed that I had been instrumental in that process. He killed a fifteen year old girl in a drive by shooting a few short months after his release and I felt a deep responsibility for what he had done but also great sadness at what he had done to his own life. I looked him up on google and he is in prison again, this time for good. Very sad.

7. Did you try more 'conventional' routes before deciding to self publish?
Absolutely. I had some very colourful daydreams of signing a big book deal with a heavyweight publisher and having my work discussed by all sorts learned people. Maybe there are writers who don’t have this daydream at some point but I doubt it! The reality was that while I managed to get my MS onto the desks of one or two of the big players they were not for taking it further.

8. Would you recommend self publishing?
Yes I would. People used to say that everyone has a book in them, well nowadays they can publish it and market it in the exact same place as some of the most important and best selling works of all time. Technically its no harder than setting up and customising a blog, it just takes a bit of patience. Social media, used intelligently, gives you, arguably, the same reach and punching power as many publishing houses. Obviously, the opportunity to chat with reviewers like you is priceless and I’m very grateful for the opportunity!

9. What advice do you have for writers striking out in to the big bad world?
I’m flattered that you ask! My advice is take each rejection personally then move on. Don’t alienate the most important people in your life by ‘being a writer’ and above all, if you feel like quitting, remember why you started.

10. Are there any more books in the pipeline?
Yes, a fiction though next time.

11. Ebook or paper?
Ebook. Format is nothing without a story. I could read The Last Grain Race in alphabetti spaghetti and it would still be every bit as good.

12. Favourite place to go on holiday?
Durness on Scotland’s north coast. It has the most beautiful - and quiet - piece of coastline I have seen anywhere in the world.

13. What are your hobbies?
Kayaking, skiing, outdoor cookery.

14. Best book you have ever read?
The last Grain race by Eric Newby.


BIG thanks to Mr G. for continuing my Indie Series and I hope you all enjoyed reading his thoughts on self publishing and now know a little more about his book which is indeed a cracking read!